They say everything’s bigger in Texas, but the advertiser-friendly mound shot that’s become a feature of the Rangers’ home games on Bally Sports Southwest this season has reduced the local nine to Eddie Gaedel-ian proportions.

In a bid to squeeze in some extra on-screen real estate for its sponsors, the RSN has switched out the standard foreshortened frame for a considerably wider establishing shot. While remaining faithful to televised baseball’s canonical camera angle, the producers have composed the mound shot in a way that suggests the HD rig has been placed a great distance from the back of the mound—in this case, mounted on a reconnaissance satellite hovering above Nacogdoches.

Roomy enough to allow for a rotating roster of banner ads that appear opposite the static Globe Life Field and Choctaw Casinos & Resorts signage, the sponsorship strip caps the first few rows of the venue’s premium seating area, better known as the Home Plate Club.

The diminishment of the pitchers, catchers and batters particularly stands out when a game carried by the Rangers’ home net is compared to a more traditional production. For example, have a look at the photo of Angels pitcher Chris Rodriguez as he’s about to deliver an 84-mph curve to Texas left fielder David Dahl. 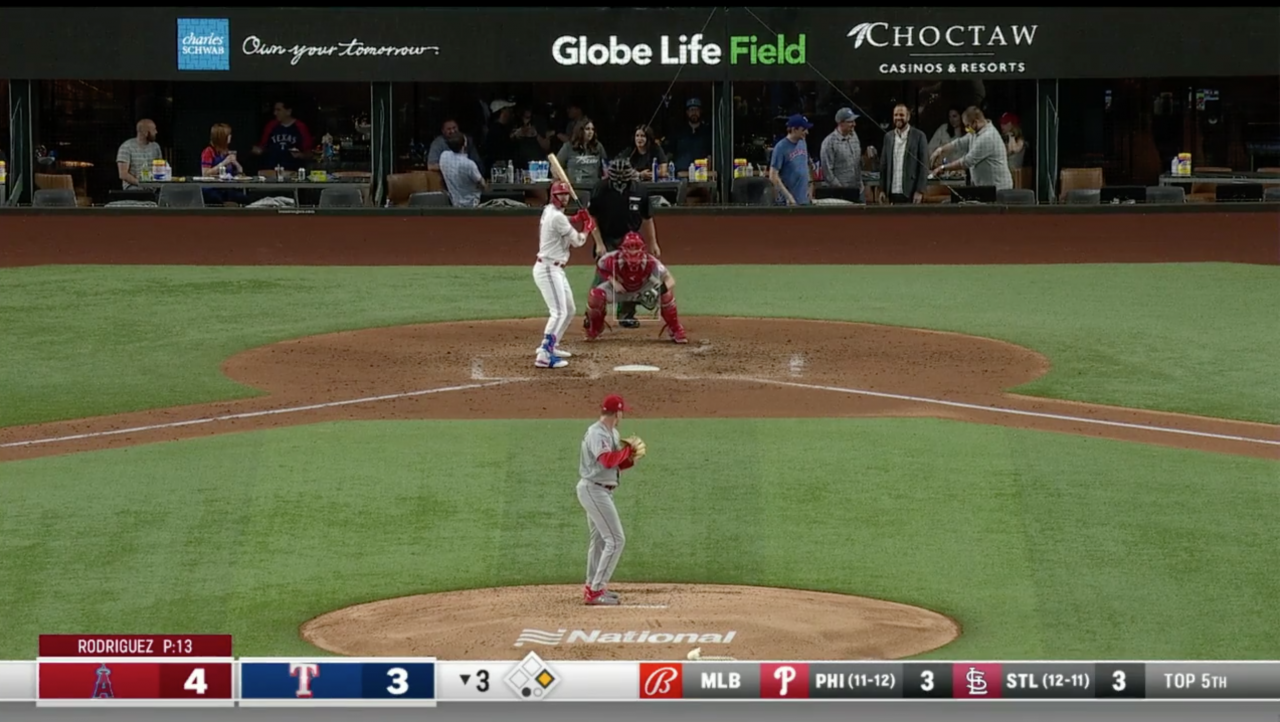 Nothing appears terribly out of order in the screen grab, which was taken Wednesday night at 9:21 p.m. EDT, although there’s certainly more of the first- and third-base lines than we’re used to seeing in a mound shot.

Yankees pitcher Michael King stands 6’3”, or just one inch taller than Rodriguez, and yet when the two shots are juxtaposed, King appears to be twice the size of his AL West counterpart. By accommodating the likes of Charles Schwab, Kroger and Old Dominion Freight Line, the Rangers’ RSN inadvertently shrank Rodriguez down to Nelson De La Rosa dimensions, while over on YES, King looked as if he were getting ready to stomp all over Tokyo’s financial district.

The camera placement isn’t necessarily dictated by the dimensions of the Rangers’ ballpark; the farthest a ball can travel within the confines of Globe Life before sailing over the outfield fence is 410 feet, which is identical to the deepest spot in Camden Yards.

For what it’s worth, Bally Sports Southwest is unique in its approach to framing the battery, as not a single other RSN is currently deviating from the tried and true. The affiliated Bally-branded channels in places as far flung as Ohio, Detroit, Florida and Arizona seem to be sticking to the traditional mound shots, as are the NBC Sports and AT&T Sports RSNs. Moreover, the handful of team-owned local nets, which include YES, SNY, NESN, MASN and the Cubs/Sinclair joint venture Marquee Sports, also have steered clear of any perspective-confounding camera work.

Of course, given the lumps sports TV has taken over the course of the pandemic, it’s not much of a mystery as to why an RSN would seek to scare up a few extra bucks here and there. While the Rangers’ home network isn’t exactly bound for the poor house—with an estimated sub fee of just over $3.50 per household per month, Bally’s Southwest station boasts the 15th-highest rate of any RSN—the team’s ratings don’t justify the robust ad rates commanded by the networks serving New York, Chicago, Los Angeles, Philadelphia and Houston.

Per Home Team Sports data, the 2020 Rangers averaged just 48,488 viewers per game on Fox Sports Southwest, making Texas the sixth-lowest draw among the 29 U.S.-based MLB clubs. As of Thursday, this year’s Rangers squad has amassed the fourth-worst record in baseball, which has done nothing to improve its local TV ratings.

Sinclair did not respond to a request for comment.

If fiddling with the on-screen perspective in the service of snatching up some additional revenue is hardly a capital offense—this town ain’t big enough for two Mushnicks—there is, perhaps, a practical element that’s being overlooked. The median age of baseball’s TV audience is flirting shamelessly with 60, which for many Americans is the age when macular degeneration starts to set up shop and glaucoma appears on the doorsteps with a battered suitcase and a kerchief bindle. If moving the camera back even farther is the price to be paid for cramming in a few more ad units, so be it, but at a certain point, much of the most loyal segment of the home audience will no longer be able to so much as see the players, let alone tell them apart without a scorecard.

The best movies on Netflix (January 2023)

Andy Cohen Apologizes For Screaming At Larsa Pippen During The ‘RHOM’ Season 5 Reunion: “I Don’t Like Screaming At Women”